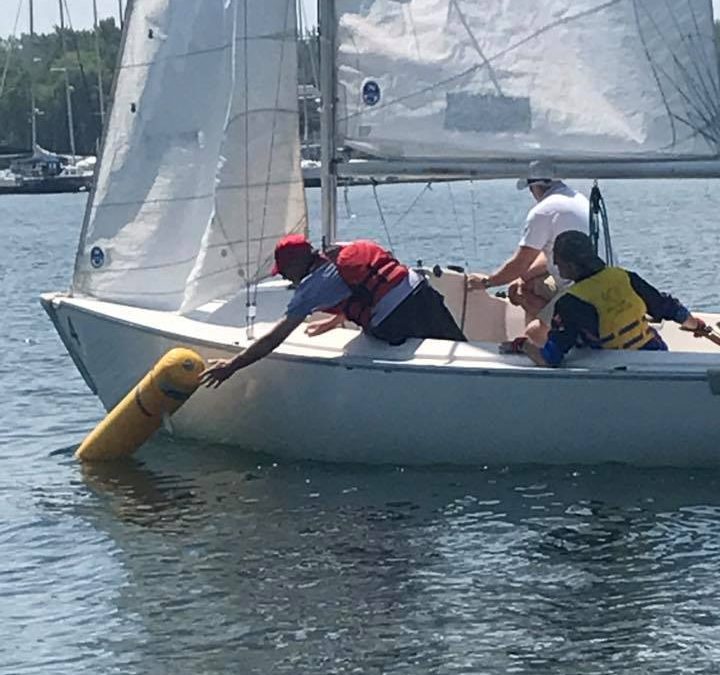 Well, it’s not the Great White North in the summer. So, Warrior Sailing went north on Lake Ontario for a first camp with our neighbors to the north, Canada. Organized by coach, Dave Scott and Kari Mackay, the 3-day Basic Training Camp was held at the Royal Canadian Yacht Club using their fleet of Sonars.

Teaming up with Soldier On/San Limites, there was a variety of sailing conditions on Lake Ontario in beautiful downtown Toronto. Coaches Ben Poucher, Sammy Lugo and Rob Emory gave the instruction along with Dave Scott. These wounded Canadian service members were introduced to the basic skills of sailing including boat rigging, man overboard and, of course, racing! Nine new sailors graduated from the training camp.

But they don’t stop there; this is just the beginning. In fact, Warrior Sailor and recent graduate, Sébastien sailed during Tuesday evening races on a J-boat and they won. Sébastien also sailed two Wednesday night races with recent grad, Darryl, on a Shark at Barrie Yacht Club and won those too. Plus, another new Warrior Sailor, Wally, is racing in Ottawa. See a pattern here?

After just 3-days of a beginning camp, 3 of the 9 are continuing to race, not just sail. Get the “bug” with Warrior sailing.

Next up, Advanced Camp!

Check out what’s involved with the Advanced Training.

We will be returning to one of our favorite places

What do you know about Warrior Sailing? Learn mo

We facilitate opportunities for skill development

Warrior Sailing is excited to be offering our US S

Never miss out on a Warrior Sailing update again!

Warrior Sailing is a program of the U.S.M.M.A. Sai

Do you want your own Warrior Sailing Gear? Visit